After a few beautiful  sunny and chilly winter days that followed the snow fall of last weekend, I had big plans for today: first ski tour of the season! Unfortunately, on Friday afternoon it started to rain... This morning (Saturday) it was still raining. It was clear that the weather was too wet for ski touring. Moreover, a quick look on the webcams confirmed my fears that high in the mountains it was also raining as the air higher in the altitude was warmer than in the city.

In the city was raining, but the temperature was below 0C. So everything got covered in a thick layer of ice! The view from my balcony did not look too inviting. 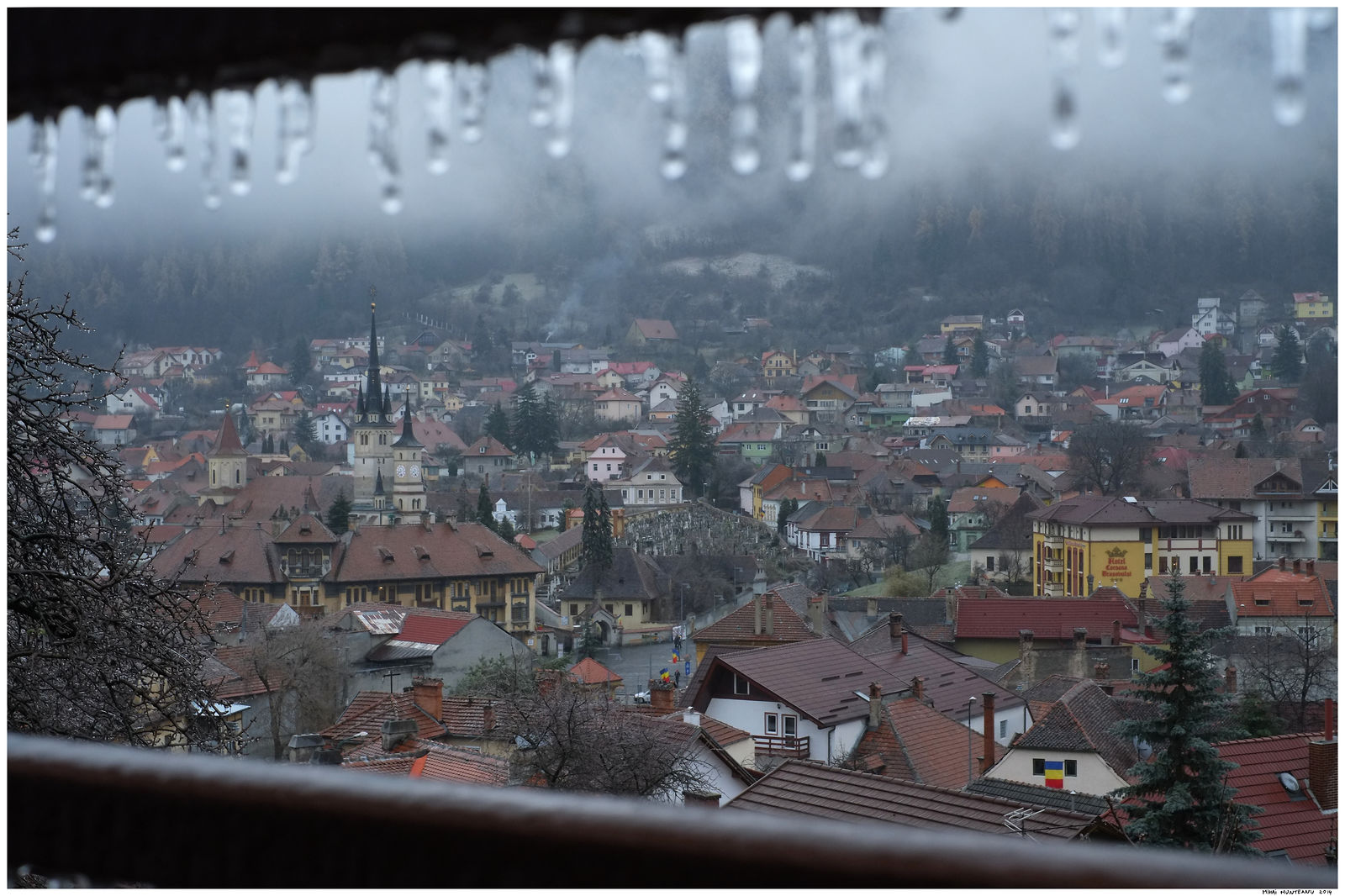 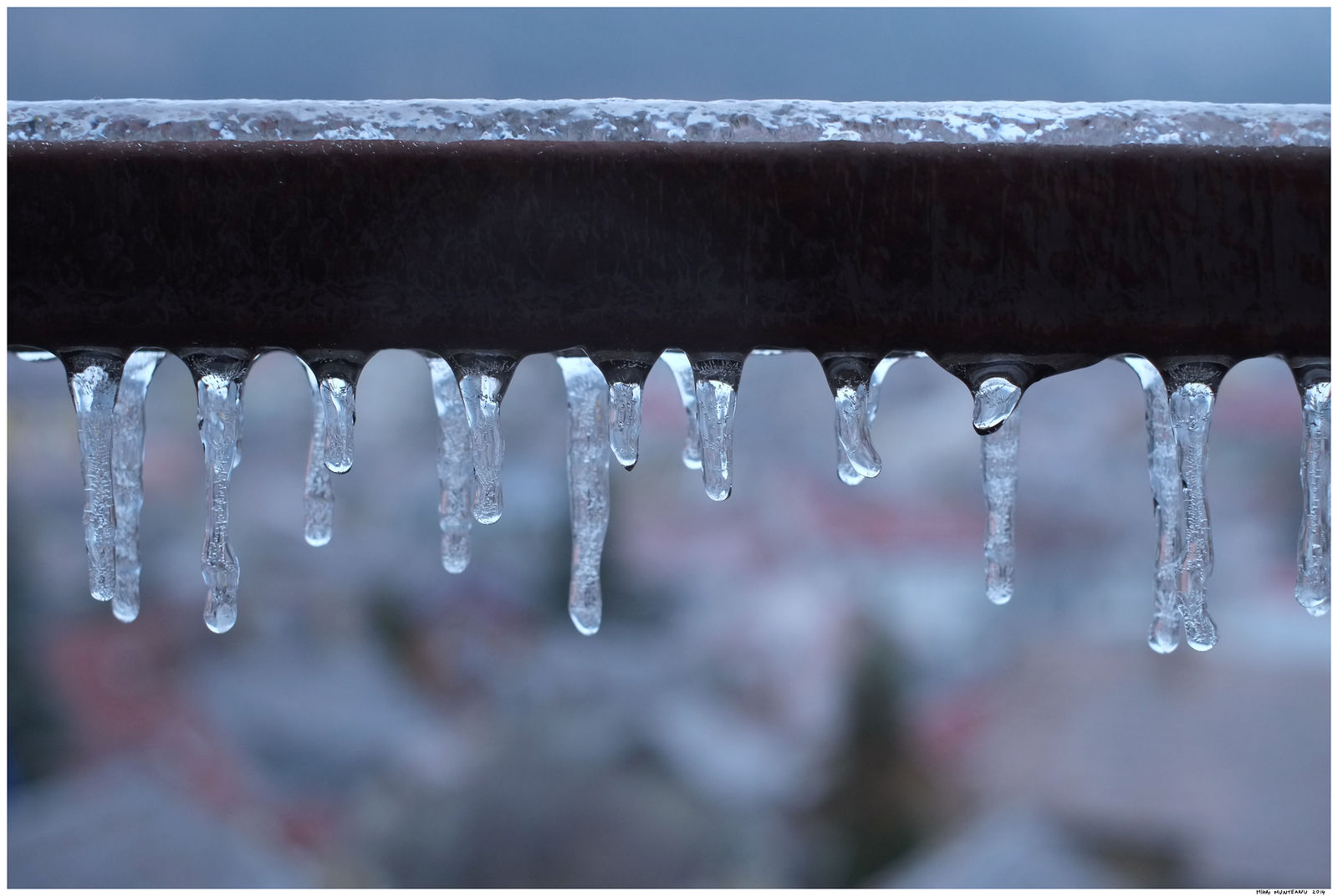 Later, towards the noon the rain stopped so I quickly got equipped for trail running. The most important piece of the equipment were the running ice crampons! Out of the city, the forest road  was covered in a thick and and rock solid layer of ice! Without the crampons it would have been impossible to walk! The icy road lasted for about 5 km. Around 1000m altitude in Poiana Brasov it was already warmer, just above freezing so there were only a few icy patches on the route. At some point I could see the sun through the foggy air so I decided to go a bit higher than the planned route. I soon got above the sea of low clouds and almost immediately the temperature rose to about +7C! There were a few skiers. The slopes on the high part of the mountain looked quite good, but lower, the ski slope was interrupted in a few places. 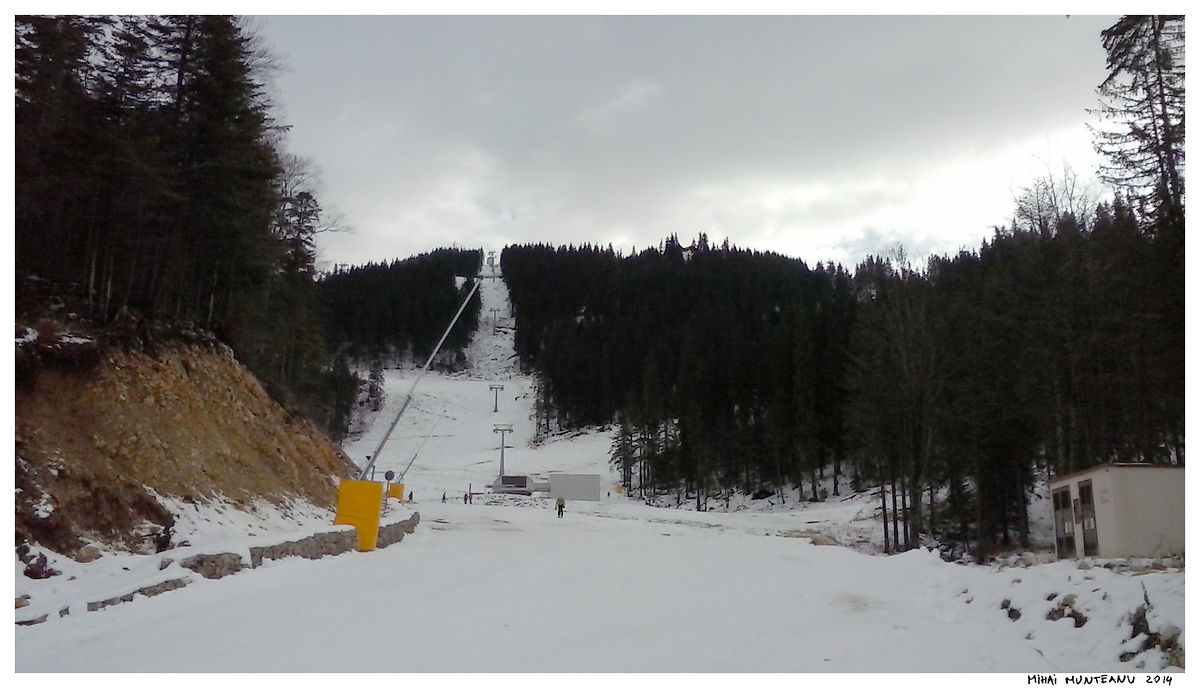 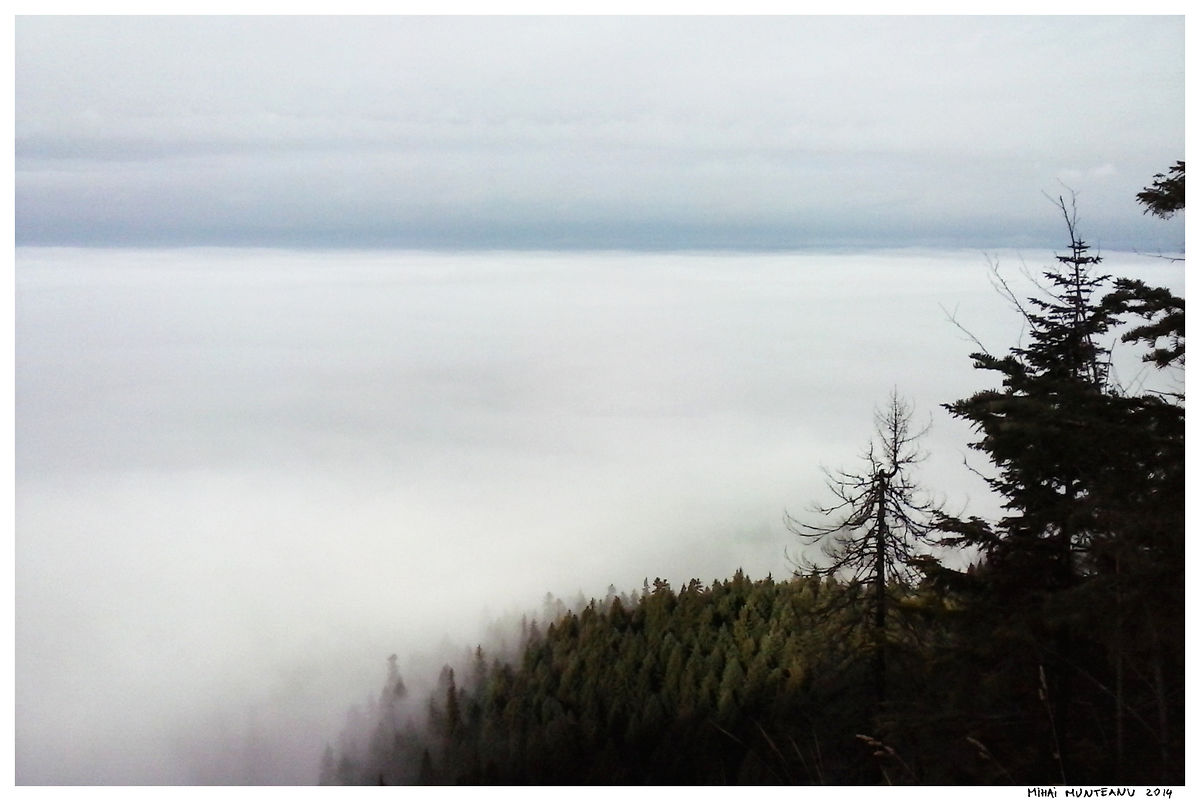 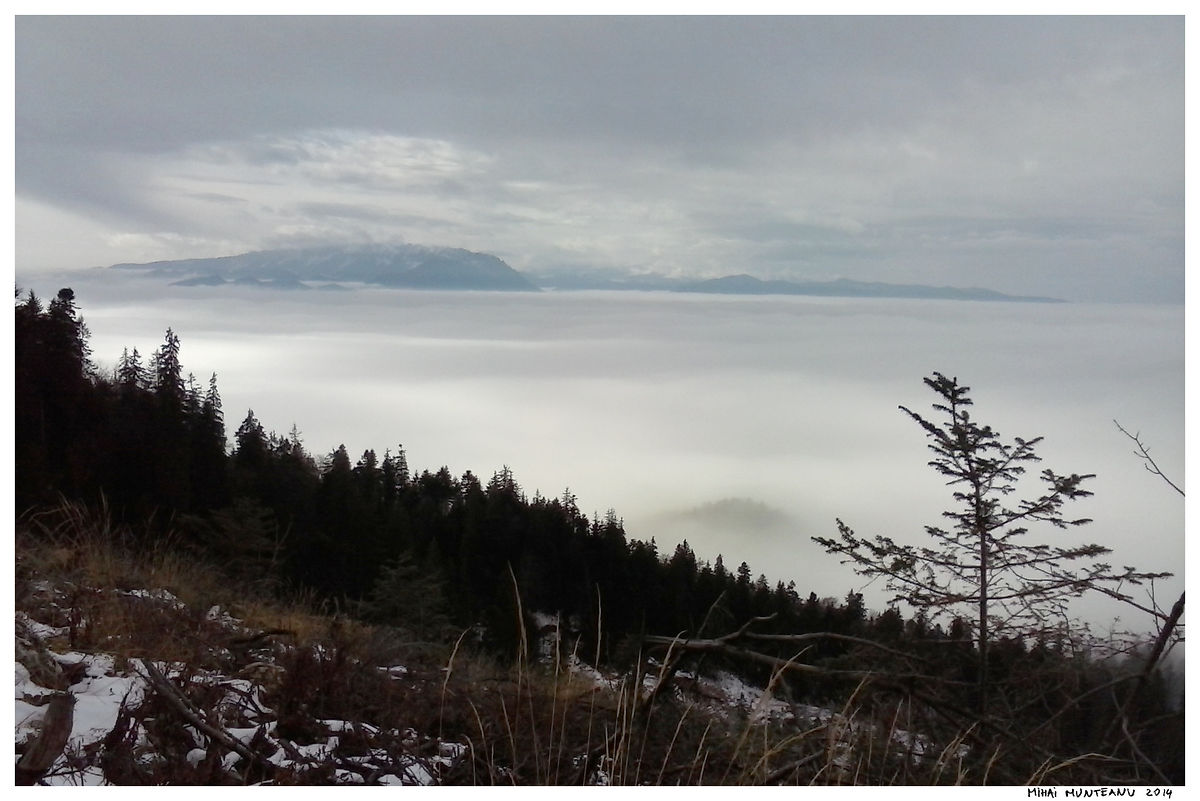 A higher layer of clouds confirmed the weather report that more rain, and then snow is on the way. I snapped a few photos with my crappy phone camera and started to run downhill, back to the city. Below 1000m altitude the temperature was still below freezing. I chose a different route downhill, along the old Poiana Road. Here, half of the road width was covered in a thick layer of leaves so the ice was not solid like on the uphill route, meaning that I could run downhill with confidence.
Now, in the evening, as I write it, the rain that started again tries to turn into snow, a sign that colder air invaded the higher altitudes... so that first ski touring trip of the season might happen very soon!

Posted by Mihai Constantin Munteanu at 22:08 No comments:

Yesterday it snowed quite seriously on the mountains. First consistent snow of the season. In the city it rained, mixed with a bit of snow flakes. Just a a bit higher, the hills around the city got their first white blanket. So today I went up to Postavarul mountain to "inspect" the trails. It was a great run!

At 1000m in Poiana the snow was already about 10cm deep and it gradually got deeper as we went up the mountain. Above 1500m it was deep enough for skiing, over 30cm of quite dense powder. There were a few snowboarders testing the snow... and the rocks under it; the conditions on the lower part of the mountain were pretty bad for skiing...

I started the run at 8:30 with a couple of other runners. Three more runners were 10 minutes ahead of us, on the same route. We went slowly up to Postavarul peak (1799m). On the way back we stopped for a hot tea at Postavarul Chalet. On the way back, from Ruia Plateau (1500m) I returned to the city alone through untouched snow on the trail along Crucur Ridge. The other runners preferred the beaten path as the were afraid that the snow would be too deep and some had to return quickly to the city. The snow on the Crucur path was just perfect for running; not deep, as half of it was up in the trees above the path...

Here is the track of the day. One of my usual weekend routes. I ran slowly at a very comfortable pace. Running in colder weather and on the snow requires more energy so it is a good idea to run at a lower pace.

I also took photos along the route. Unfortunately I only had the crappy camera of my cheap smartphone. Actually the photos are not that bad, especially when viewed on smaller web resolution...


Posted by Mihai Constantin Munteanu at 20:04 No comments:

This weekend we got first snow on the hills and mountains around Brasov. So I can say that the autumn season of 2014 is more or less over. Most trees are now leafless waiting  in silence for the winter snows.

Autumn is always a wonderful season in Brasov, a great time to take photos. Here are two albums of photos I took this autumn around Brasov along the trails where I normally run: 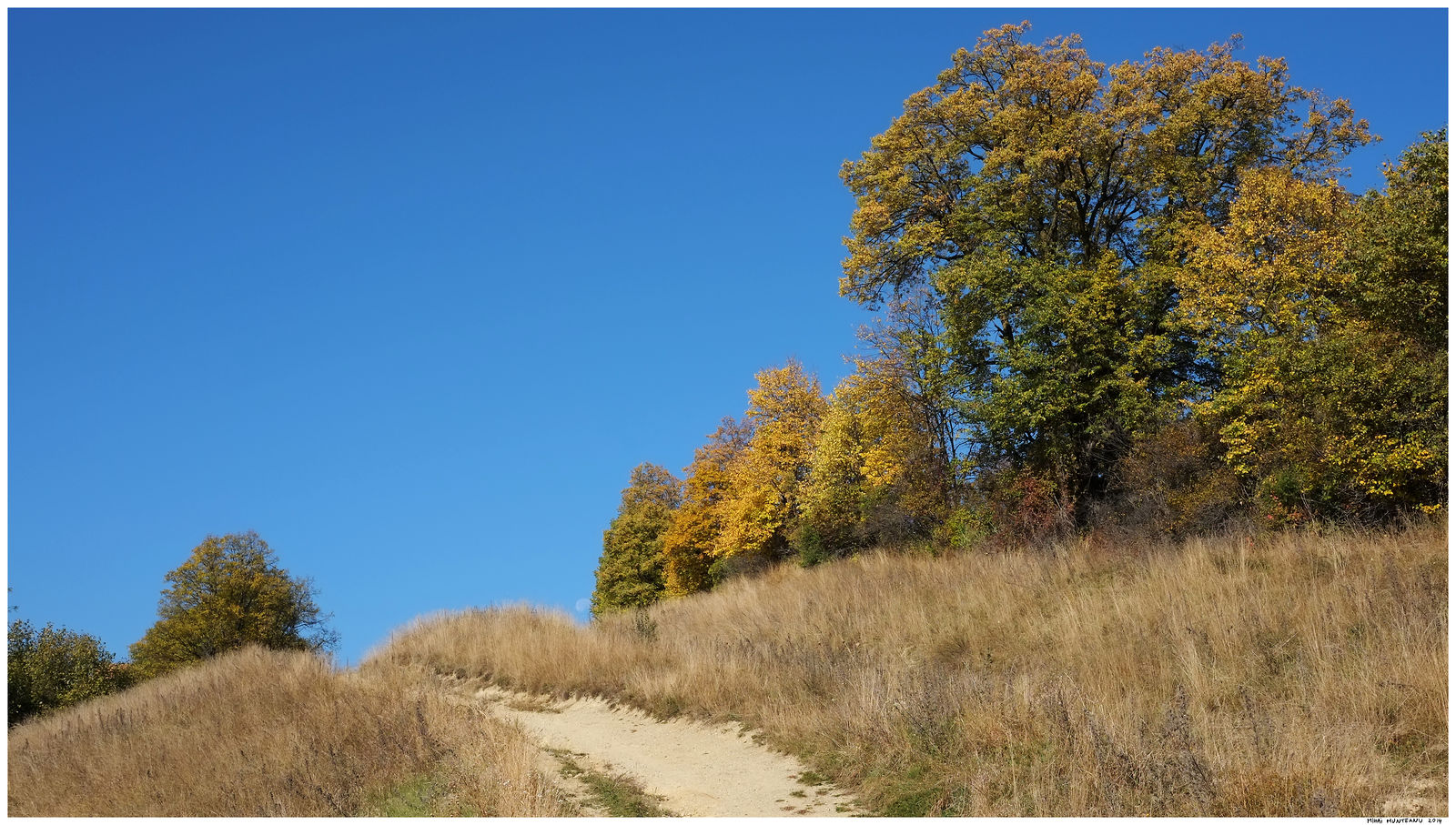 Posted by Mihai Constantin Munteanu at 19:00 No comments: