Every year I return to what I believe is the most beautiful route in the Carpathians. 25 km of amazing landscapes; form some of the wildest corners of the Carpathians to beautiful mountain villages.
The route follows two thirds of the Piatra Craiului Marathon route, a race that I ran twice in the past. However I enjoy it more at a slower pace that gives me time to admire the landscapes.
Last year I witnessed the height of the autumn season with such amazing colors I have never seen in other parts of the world:
http://mihai-munteanu.blogspot.com/2019/10/autumn-again.html
The variety of spectacular landscapes along this route is amazing. Starting in the deep upper valley of Bârsa River by Plaiul Foii, the route follows a mountain stream through the forest, going up towards the impressive western rocky side of Piatra Craiului massif.
Once it reaches the base of the cliff faces, the route continues to climb gently between the huge rocky walls and the forests below, passing the most impressive scree areas in the Carpathian Mountains (lose rocks accumulations).
The views to the west are impressive. Endless forests and majestic mountains: Iezer-Păpusa and Făgărași massifs.
The route goes then up a steep valley (Valea Urzicii) and reaches the Piatra Craiului's southern end of the ridge in Funduri Saddle. This is the highest point of the route: 1900m, which is more than 300 meters lower than the highest peak along the ridge. The route follows the ridge for a short while, then descends on the other side trough beautiful alpine meadows. Here the view opens to the east. The view is dominated in the distance by the mighty Bucegi massif.
After crossing the grassy expanses of Joaca Pass the landscape changes again. The route reaches the beautiful mountain villages of the Bran area. The views are so peaceful and picturesque! We pass by Peștera village then through Măgura village.
From Măgura village, a short descent through the forest brings us to the famous Fântăna lui Botorog water spring. Time to refresh for the last few kilometres to Zărnești town, the end of this amazing route. 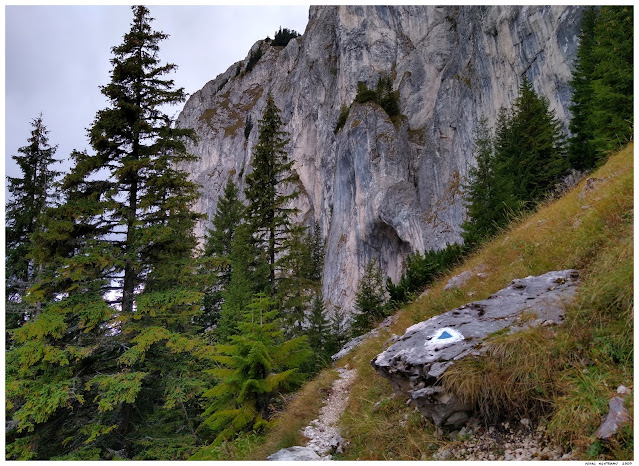 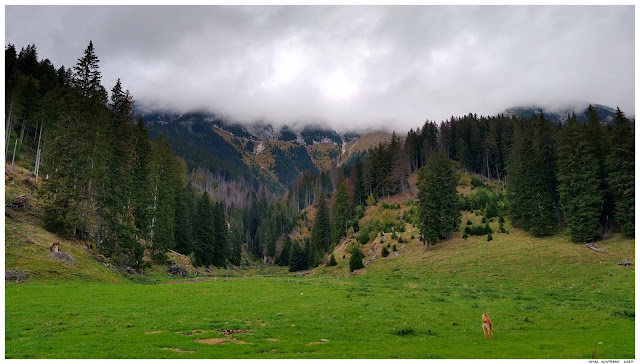 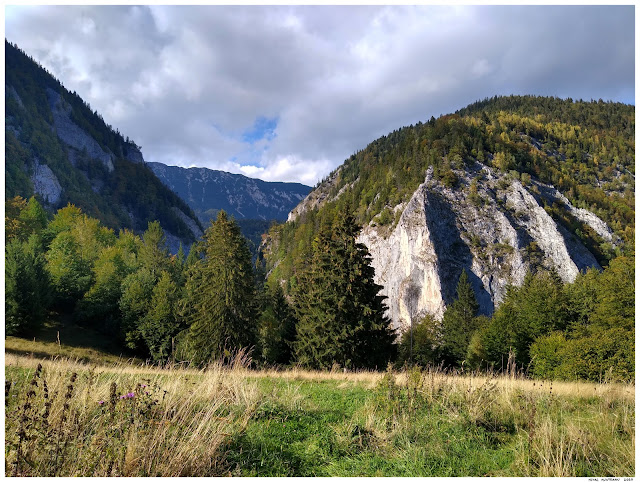 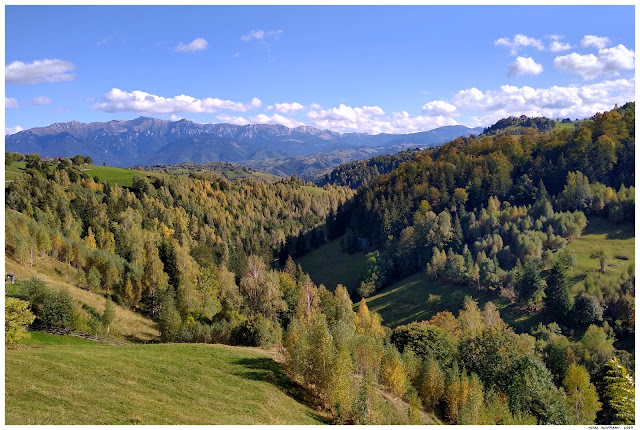 Posted by Mihai Constantin Munteanu at 12:36 No comments:

Făgărași Mountains is the most massive and the highest massif of the Romanian Carpathian Mountains. Its ridge trail is probably the most famous mountain hiking route of the Romanian Carpathians. It measures about 90 km, with over 6000 m accumulated elevation gain. The length and the altitude gain do not seem too extreme as a mountain ultra-marathon route, but the rocky trails that include a few rock climbing sections and the fact that around 70% of the route is above 2000 m altitude, makes it more difficult than it looks on paper.

Every serious hiker or trail runner in Romania and many from abroad attempt to cover the whole length of the ridge route. The classical route starts at the West end in Turnu Roșu Village, or a bit higher by the Turnu Roșu Monastery where the tarmac road ends. This is the place where we started our speed hike/trail run. The end of the route is at Rudarița, a forest cabin, deep in a valley at the end of a forest road by the eastern end of the ridge.

My first attempt to speed-hike the ridge in 3-4 days with my good friend Nic, was in September 1994... However after a good first day we had to abandon the plan as during the following night the mountains got covered in a thick snow layer...

This time I was luckier with good stable autumn weather. Mihai, my companion planned this route in great detail, calculating the times and carefully pinpointing the locations of the water sources along the ridge. We followed the official ridge route from West to East - the classical direction. The western half of the ridge is more technical, with more rocky sections. The last 20-30km on the eastern side have much more gentle gradients and wide grassy mountain faces.

The plan was to do it in two days, speed-hiking and running around 12 hours every day and we managed to stick to the plan very well. We only had a 40 minutes delay on the last day, of which 20 minutes can be attributed to getting lost in the thick forest on the last descent.

We covered the 35 km of the first day in just a bit over 11 hours. The rocky terrain meant that the progress was quite slow, but we have planned for this.

We did an overnight stop at Bâlea Chalet/Hotel, which is conveniently located around the middle point of the route technically speaking. The Chalet is located just by the Transfăgărășan Road, an alpine road that crosses the mountains. This means that even thought the chalet is located high in the mountains, it offers the full comfort of a 2-3 star hotel. So we had a good warm shower, a good sleep, a plentiful dinner and a good breakfast.

Second day we had a 55km route that we covered in less than 13 hours. The start was slow due to the rocky terrain, but the last half of the day had great "runnable" trails on grassy alpine meadows.

We used mountain/trail running equipment, including hiking poles. The running rucksacks weighted just 4-5 kg at start, including the water. The unusually warm and dry weather meant that we did not have to carry heavy and warm clothes. We had some warm clothes - woolen shirt, rain/wind jackets, gloves, long trousers, etc. but we hardly needed them. It is worth noticing that the weather can be very unpredictable up there and that it can snow at any time of the year. However, autumn is the most likely time of the year to have a few sunny stable weather days in a row, as we had.

How do we measure with others? We did not aim to set any record. The target was to complete it safely it in two daytime stages... and we just did that! Under 24 hours (11+13) of hiking, plus a night break is not a bad performance.

Average hikers do it in 6-7 days, often carrying heavy rucksack with tents and lots of equipment. Good hikers with lighter rucksacks including sleeping bags (for sleeping in mountain refuge huts) do it in 3-4 days. Fastest hikers manage to just do it in two days. Best trail runners, usually with the help of a support team supplying them with water and food in 2-3 places along the ridge can do it in one go.

What is the record? Well, almost twice as fast:

2019 Oct 19: Robert Hajnal:
12:41:50
https://www.strava.com/activities/2801053446
2015 July 13: Silviu Bălan:
13:18:50
https://www.strava.com/activities/345006193
Previous record attempts are mentioned here:
http://alerg.ro/fkt-hajnal-pe-creasta-fagarasului.html
Could I do it faster? Maybe in one go? Yes... but not sure I want to do it. Now that we know the route better, we could optimise it, with fewer detours to water sources, no photography stops, better training and physical preparation...
Here are my two days as recorded by Strava:
And the consolidated GPS track: 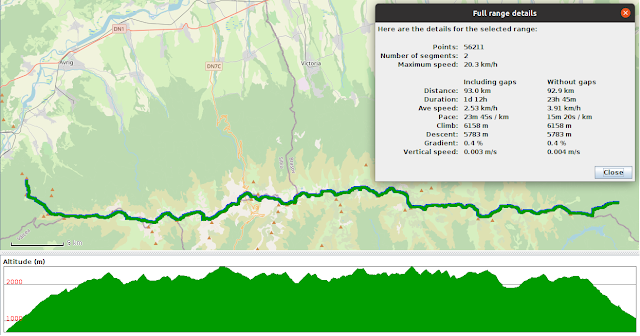 Here are more photos taken during the two days. All taken wit an average phone. As I tries to minimise the weight of the gear I carried, I did not take a serious photo camera. However the fully automated mode (including auto HDR did a decent job. Just minimal post-processing adjustments were needed)


Posted by Mihai Constantin Munteanu at 11:16 No comments: