Brasov Marathon is a well organized mountain trail running race with a beautiful route along the same trails I use to run every week. I participated three times in this event. However, this time, for the second year in a row, I did not participate, although I was considering it. I still run a lot, but I do not feel the urge to compete in races.

This year edition was very special! The organizers were once more lucky to have a beautiful sunny day for the races, but the conditions were truly extraordinary! If the weather at some previous editions was sometimes too warm, this year it was not only too cold, the abundant fresh snow made it feel like in the middle of the winter!

It is not unusual to get cold weather spells and snow flakes during April in Brasov. However, this year it snowed almost continuously for two days in a row, and temperatures dropped below 0 degrees. It started to snow on April 19, Wednesday evening, and stopped two days layer, just half a day before the race... The snow in the town was about 30cm; up the mountains, the fresh layer of snow measured more than half a meter!

On Friday I went skiing enjoying the best powder of the season! I was thinking that the marathon race would be canceled. However, the organizers decided to go ahead, probably encouraged by the good weather forecast. The list of mandatory equipment was updated and the route was shortened a bit - the highest point would not be Postavarul peak, but Postavarul  mountain hut, located 200m lower, near the ski slopes.

The night from Friday to Saturday was very cold for an April night. The sky cleared over night and in the morning the landscape looked like in the middle of winter! 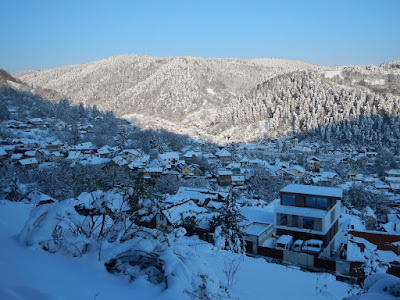 7AM in the morning I started from the edge of the city on my touring skis. The plan was to reach Postavarul Peak (1799m) in about 3 hours and move fast enough so the marathon runners would not catch me up. 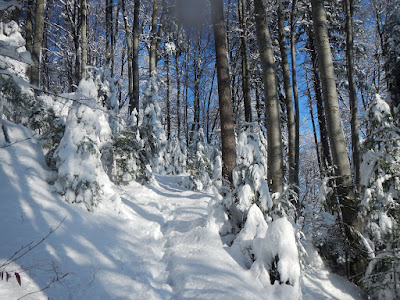 Well, going up the mountain proved to be much tougher than I thought.  Even below 1000m altitude the snow was almost 50cm deep and there were just a few foot prints on the trail. I had to work hard for every meter of altitude. It became clear that at some point the runners will catch me. 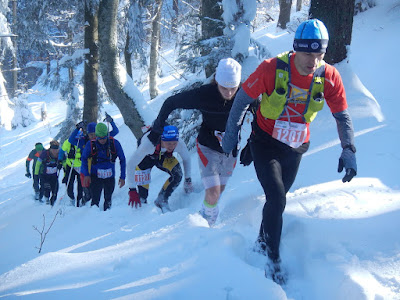 This happened on Crucur Mountain, just before the trail reaches the ridge. First group of runners overtook me. They ran like a fast train, apparently not slowed down by the deep fresh snow. But I knew ho much extra effort is needed to keep going like that in deep snow.

On the last steep slope in the forest, just before reaching the ridge I got stuck in the deep snow with my skis. The runners kept coming and as I did not want to block the path I took the opportunity to take more photos of the race. Eventually my hands started to freeze and as there were fewer runners on the trail I moved on. After so many runners had passed the snow on the trail was packed, so it was much easier to go ahead. 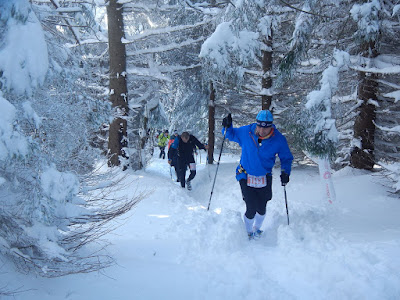 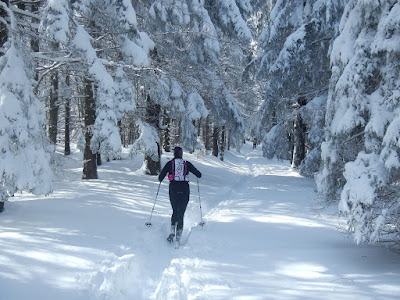 A few more kilometers and I have reached the sunny ski slopes on Ruia plateau at 1500m altitude. As the ski season was officially closed, the ski slopes were almost deserted. Just one cable car was functioning as it is the case during the summer season... Here I left the marathon route and joined the ski touring trail... There were many skiers climbing the mountain on touring skis and enjoying the beautiful day. 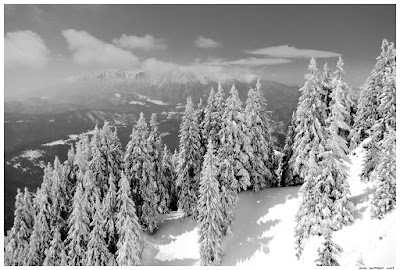 I continued my way up and almost four hours after leaving home I have reached the mountain summit. After enjoying the mountain views I slowly descended on the mountain on my skis, enjoining every turn on the perfect slopes! 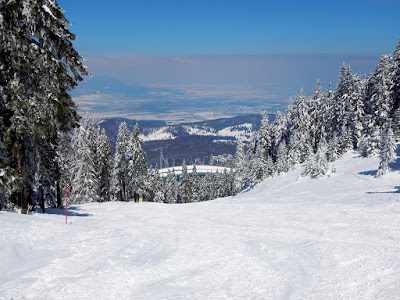 From Poiana Brasov ski resort I descended to the city on on skis through the forest. I knew that the old road of Poiana (Drumul Vechi) had enough snow, because I have skied it down the day before. However, this time the snow was melting fast under the strong April sun. I could just make it down on skis on the slushy snow...
The spring was in the air again! 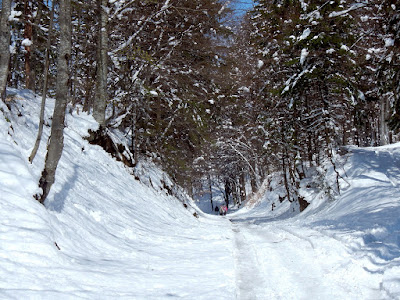 Here is the complete set of photos I took with the Marthon Runners.

And this is my day track:

Posted by Mihai Constantin Munteanu at 09:55